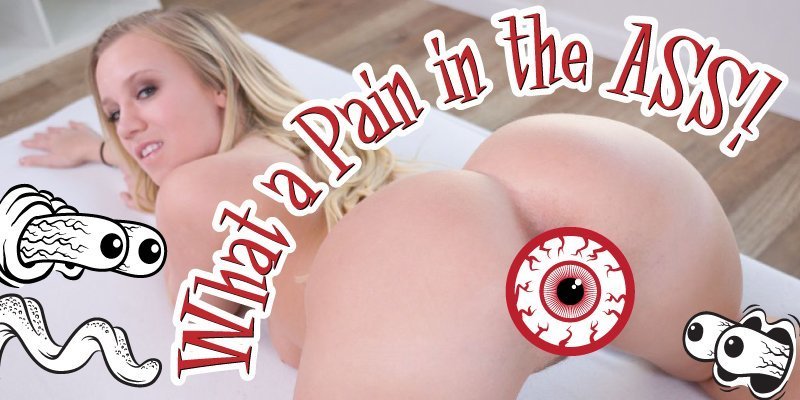 First we have Mystic, who through the marvels of modern science no longer worries about butt trouble like hemorrhoids. When installing his Robocop foot, he upgraded the surgery to add a ShopVac Colon! Even springing for the 100ft power cable!

Oracle is the next butt berry in the Red Eye tree. This week he had no butt trouble, but instead got sick on a plane and thought he was gonna die. All because he was scuba diving just the day before he flew up to 30.000 feet in elevation. He would have died of the bends, but was saved by his Spirit Airlines seat, which only reclines 5 degrees!

we have Teddy. Buddy, as a fellow butt lover, I advise you to cover your eyes and plug your ears this episode.

And I’m Ashtray. The host who asked aloud, “how can we talk about something even more absurd than Plumbing?” and then the inspiration came to me — HEMORRHOIDS inspired by a true story. This weekend I got my first hemorrhoid and I’m sharing pictures on the RED EYE REPORT!

No seriously I can’t share pictures of it without burning your eyes out and leaving you forever haunted. But we are going to talk about that which no one talks about;

I got the RHOID-RAGE this Sunday, and I don’t wish it on my worst enemy, or even Mystic.

What is a Hemorrhoid?

We only call them Hemorrhoids when they get pissed off and inflamed.

Essentially a varicose vein, but on your butt.

50% to 66% will have problems with them at some point in their life.

Males and females are both affected equally.

More common among the wealthy.

Many pregnant women get them from the extra load of child bearing.

Normally they are what forms the starfish shape of your puckered butt.

When thrombosed they are very painful.

Look like an asymmetrical bulge on your poop shoot

Swelling may last a few weeks. Pain usually clears up in 2-3 days.

Over the counter lotions and a high fiber diet.

Stop reading on the toilet.

Sclerotherapy – injecting a sclerosing agent to cause the vein walls to collapse and shrivel up. 70% success rate.

Cauterization – used when other methods fail

First known mention was from 1700 BC on Egyptian papyrus with an ointment recipe.

460 BC the Hippocratic corpus discusses a treatment similar to modern rubber band ligation;

And hemorrhoids in like manner you may treat by transfixing them with a needle and tying them with very thick and woolen thread, for application, and do not foment until they drop off, and always leave one behind; and when the patient recovers, let him be put on a course of Hellebore.”[

Hall-of-Fame baseball player George Brett was removed from a game in the 1980 World Series due to hemorrhoid pain. After undergoing minor surgery, Brett returned to play in the next game, quipping “…my problems are all behind me.”[41] Brett underwent further hemorrhoid surgery the following spring.[42] Conservative political commentator Glenn Beck underwent surgery for hemorrhoids, subsequently describing his unpleasant experience in a widely viewed 2008 YouTube video.[43][44] Former U.S. President Jimmy Carter had surgery for hemorrhoids in 1984.[45] Cricketers Matthew Hayden and Viv Richards have also had the condition.[46]

Ashtray: Where the hell are all the butt doughnuts?

In all Seriousness: Go fuck yourself Sucker Flat, California. That’s our show, we’re gonna be here every Wednesday night at 10pm central, make sure you join the conversation at theredeyereport.com or facebook.com/redeyereport…..you can also twittle us at twitter.com/red_eye_report….like us, share us, or fuck us, we’re down for whatever. I’m Mistic…………….and this is the RED EYE REPORT!!!!!