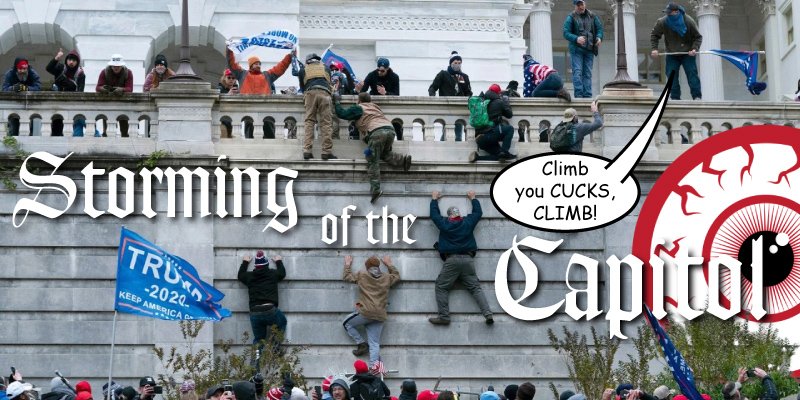 In this episode we talk about the storming of the U.S. Capitol that took place on January 6, 2021. Where the hell are we going with all of this? Turns out, this isn’t the first time the capitol has been stormed. Also on the show, Oracle shares some of the new RER review stuff on theredeyereport.com and Mistic reminisces about cocaine, hookers, and Russian submarines of the 80s.

Times in the past the Capitol was stormed:

July 1915: Dynamite exploded in the Senate Reception Room. Erich Muenter, a German born professor who did it as an appeal for peace during World War 1. Went off at midnight before the 4th of July, so no one was injured, but the room was heavily damaged.

March 1954: Four Puerto Rican Nationalists fired 30 rounds from the Ladies’ Gallery above the House of Representatives. Five Representatives were hit, but no one died. The nationalist were all given life sentences, but were later pardoned by President Carter.

March 1971: A bomb exploded in the Senate wind of the Capitol building. No injuries, but significant damage. Weather Underground took credit as a protest to the Vietnam War.

November 1983: Another bomb in the Senate exploded but no one was injured as the Senate had convened earlier than expected. A “armed resistance unit” took credit and said it was in response to US Military aggression in Grenada and Lebanon.

July 1998: Gunman Russell Weston skipped through a security checkpoint and killed two Capitol officers. He was eventually caught and probably hit with a brick.

Ashtray:    Trump’s got Georgia on his mind:

In all Seriousness: Go fuck yourself Cracker Jack Box, ya stale fuck. That’s our show, we’re gonna be here every Wednesday or Thursday night at 10pm central, make sure you join the conversation at theredeyereport.com or facebook.com/redeyereport…..you can also twittle us @redeye_report….like us, share us, or fuck us, we’re down for whatever. I’m Ashtray…………….and this is the RED EYE REPORT!!!!!