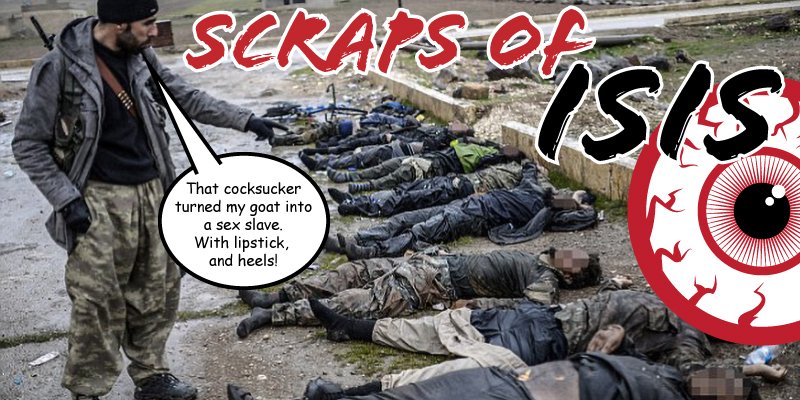 Tonight on the Red Eye Report, we’re gonna update you about them evil sumbitches we first told you about years ago: ISIS – or Dash, as our Middle Eastern listeners would call them. Or Cray-Cray, as the former bad boys Al Qaeda have called them.

First off we have Oracle. Recently his office building has been overtaken by black mold, and may soon be condemned. What the rest of the staff doesn’t know is his lazy ass has been tossing dirty yogurt cups and chewing tobacco into the air return vent for the last 3 years. His festering fungal spores have touched them all with the subtle hint of Kodiak flavored Yoplait.

While Oracle was contaminating the office, the rest of us were busy releasing sex tapes.

First was Mystic. He recently tried to become famous by posting his sex tape “I came as fast as I could”, which really was just 15 seconds of mayonnaise dripping from a sandwich onto his crotch.

Don’t forget about Teddy. His sex tape was titled “Black Cock in the White Lagoon”. He was surprised to find out that filling your neighbor’s pool up with whole milk and doing the dead man’s float while fully erect would be a violation of his probation.

And your mediocre host Ashtray; who’s sex tape was “The Whisky Dick Whisperer” – Come on buddy. Wake up. It’s the big game and the pussy field is right there. I can only fist her for so long before she taps out. I told you not to have that last whiskey, ya dumb cock.

And this is the RED EYE REPORT

Saturday, April 20th – The Syrian Democratic Forces, a Kurdish-led group supported by the U.S., declared a “total elimination of so-called caliphate” and a complete “territorial defeat” of ISIS.

Thousands of women and children of the ISIS fighters are listing in limbo in refugee camps.

Al-Hol camp, in Syria, holds over 72,000 women and children who came from the last place ISIS held — Baghouz.

Many are being mistreated, raped, neglected.

Most are Syrian and Iraqi women and children who married or where born from ISIS fighters.

More than 1,800 women and children from Europe and North America are in detention camps, while their home countries debate about what to do with them.

These camps do get lectures about how ISIS sucks, and speeches from Yazidi minorities who were tortured and killed by the ISIS caliphate that they hold so dear. But will they believe anyone from the outside who comes to tell them?

Leaving them in camps is just going to bread more radicalism.

Iraq and Syria are still too fucked up to take them back.

Sunni Muslims are all being painted as ISIS collaborators by the Shiite militias, while Shiite victims want revenge for what ISIS did to their families.

The large al-Hol camp still has no deradicalization programs.

Hundreds of trucks were allowed to leave Raqqa with ISIS fighters and their families. It was a 72hour drive, bumper to bumper

Video of the convoy that was to be secret

Children of the ISIS fighters all believe it is their duty to rebuild the caliphate.

They harranged the NPR reporter:

“Convert, convert!” a group of women and girls shout at me, urging me to recite the shahada, the Muslim profession of faith: “There is no god but God, and Muhammad is his messenger.”

“If you became Muslim and cover like us and became a member of our religion, you would not be killed” in the ISIS caliphate, one woman tells me.

They say everything under ISIS was what God wanted.

“Of course there were beheadings — why should I lie?” says a Syrian woman. “It’s based on the Quran and the rules of God.”

Asked about the Yazidi minority, which ISIS targeted with a campaign of genocide, the women shout: “Devil worshippers!”

“If they don’t convert to Islam and they don’t become Muslim like us and worship God, then they deserve it,” an Iraqi woman says.

This camp, they complain, is full of infidels. There is music. Male and female guards wear tight clothing and smoke cigarettes. They say the men harass women.

“This is the next generation of the caliphate,” one of the women says. “If you talk to them, they have the true creed implanted in their minds. The true creed will remain.”

And in fact, it’s a girl from the Iraqi city of Tikrit who is among the most fervent in the group. She appears to be 11 or 12.

On judgment day, the girl tells us, God will pour molten metal in the ears of those who listen to music.

“The ones who are not covered, now I ask God in the next life to light the fires of hell with their hair!” she declares.

She says she went to school under ISIS — what she calls a proper school, with boys and girls segregated — and vows she won’t go to school again until the caliphate returns.

They all believe it’s just a matter of time.

Abu Bakr al-Baghdadi is alive — or not

The fate of the self-described caliph, Abu Bakr al-Baghdadi, remains unknown. He has been reported “killed” perhaps a half-dozen times. In 2017, a Russian lawmaker said a Russian airstrike “close to 100 percent” killed him. U.S. military officials in Syria believe he is still alive, hiding out in the desert near the Syria-Iraq border, based on communications intercepts and interviews with ISIS detainees. Last August, ISIS released an audio recording purporting to be Baghdadi, but he has not been heard from since.