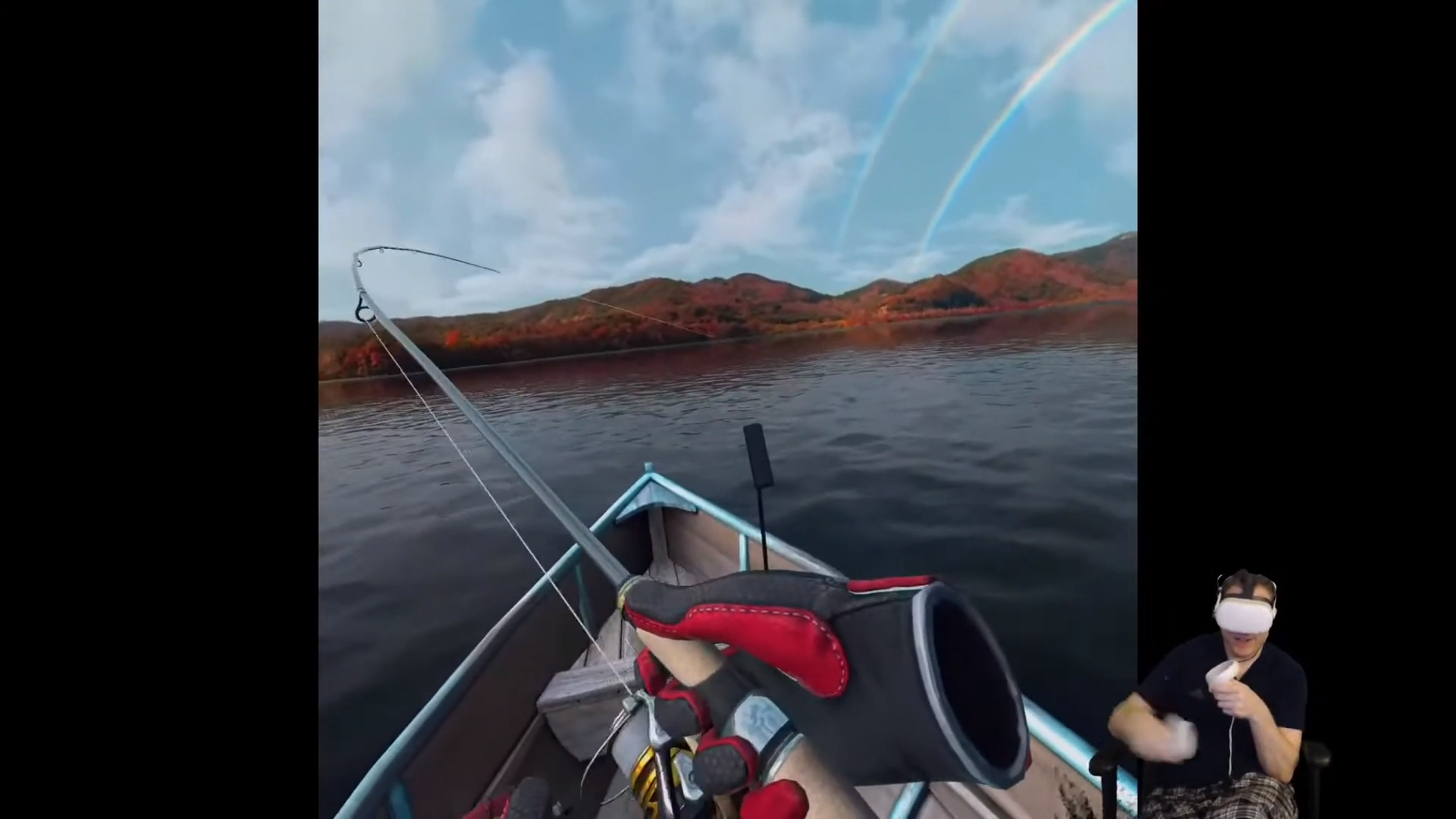 VR is in a unique position in gaming. It’s truly novel for many users. Long gone are the days of marveling at mouselook in a first person shooter or crying in jubilation at the sound of your dial up modem connecting to a friend and the possibilities of online multiplayer. VR tech, even though it has been around for 20+ years, has yet to be experienced by most people outside enthusiasts. “Good VR,” or VR that was produced for a larger consumer market has only been around since 2016 with the official release of the HTC Vive. To enjoy that experience, you needed a powerful gaming PC. Wireless, PC-free VR gaming (Good VR with proper controllers) didn’t arrive until late 2018 with the original Oculus Quest. The release of the Oculus Quest 2 in 2020 meant much higher fidelity games for PC-free VR, more developers creating games for PC-free VR, and thus more opportunities to blow somebody’s mind when you let them try VR for the first time.

There is a certain ilk of VR apps that you want to show off to your relatives or friends that have never tried VR before. It needs to be a recognizable experience that they can dive into right away. Chances are you’re showing it off to a non-gamer or someone that plays Candy Crush more than Call of Duty. VR games that are on the top of that list are things like Beat Saber: Just hit the fucking blocks, Grandma! Superhot is effective as well: Just shoot them in the face, Grandma! The king of VR games at the moment in terms of technical chops and what not, Half Life: Alyx (which needs to be running on a gaming PC but can be streamed over wifi to the Quest 2), is too much for a non-gamer. Us nerds take reloading mechanics and checkpoints for granted. We’ve been suckling on those gaming tits for decades now. Newbies just need to hit a fucking block or point a shooty-shoot in a direction and pull the trigger.

Good news, I have a new VR app suggestion that will absolutely blow your uncle’s alcoholic brain: Real VR Fishing for the Oculus Quest and Rift. I’m playing it on the Quest 2.

Fishing works really well in VR to begin with. Real VR Fishing has taken many of the best aspects of VR fishing games and refined them to produce something that feels polished and is a lot of fun. The first thing that will make your cousin cream her pants are the graphics.

Photorealism is not something that you find in today’s VR games. VR is taxing on current hardware. To make VR work, your machine needs to render two separate cameras simultaneously, one for each eye, at a high frame rate like 90 fps. If the frame rate drops below 90 fps, the user will become VR sick. Having players puke their guts out is a bad business model for VR developers. That’s why many VR games use simpler graphics models and graphic filter techniques like cell shading. More basic graphics are fine for most VR games. If the core gameplay mechanics are solid, the physicality of VR games with directional audio combine to make an engaging experience.

Real VR Fishing stands outs immediately in the graphics department. The team at MIRAGESOFT has masterfully pulled off a blend of 2D photos and 3D geometry. I seriously think this might be the best and most convincing example of the combination of 2D photos and 3D geometry I’ve ever seen in a video game. In the distance, you will see bridges, hills, docks, and parked cars. Those are all comprised of a curved, 2D images. The water, rod, and fish are 3D geometry, and they have been crafted with exquisite detail.

It’s that level of detail that pushes Real VR Fishing off the charts in the graphics department. For instance, in one level where I was fishing at dusk, a swarm of bats emerged over the wide river that I was fishing on. While I watched the tip of my pole flex as fish nibbled at my lure, I was watching the giant swarm of bats gyrate and morph over the water in the distance. If you look off to the right or left on a shoreline, you might be rewarded by the sight of a swarm of insects flying over a pile of vegetation. Flocks of birds will frequently fly overhead. At night, fireworks will burst over the city skyline and shooting stars will streak in and out of view. There’s even a double rainbow. All of these fine graphical details stack up to create an ultra-immersive experience.

Real Fishing VR features twenty different fishing spots throughout South Korea. When you catch a fish, you can choose to either release the fish for XP or keep the fish for cash. Gaining XP helps you progress in levels and unlocks new fishing locations along with the ability to buy new gear like reels, rods, lures, boats, and cosmetics for your avatar. The cash allows you to actually purchase the items. I’ve found the progression to be fair and not too easy or difficult. You need to catch a decent amount of fish to make gains, but guess what, we’re in VR-land, so if you’re using the correct bait and cast out, you’re going to get a bite in 10 seconds or so. Eat shit real life!

Let’s talk about gameplay. Fortunately, Real VR Fishing is much more than eye candy. The gameplay mechanics are good. The developers have gamified fishing in some clever ways. In other VR fishing games, it’s pretty much just about the tension of the line—which is true here too, but how you manage that tension is a bit different. On a basic level, don’t reel the line when the tension is too tight (red line) or reel it in when the line is too loose (blue line). Following those guidelines pretty much guarantees catching smaller fish. For bigger fish, how you manage line tension becomes much more critical. If a fish runs to the left, you need to pull your rod to the right. If the fish jumps out of the water to the right, you need to snap your rod to the left to potentially stun the fish and give you valuable uncontested reeling time. If the fish is in a “rage state” and splashing around, you need to slow your reeling down and anticipate if the line will be too tight or slack when it finishes throwing its tantrum. When you’re going after bigger fish, there’s no guarantee that you’ll actually pull it in. You need to work for that shit, and it means that this isn’t some sort of weird South Korean fishing slot machine. You can chill and go for medium and small fish (which on hard difficulty you see a fish detector before you cast out), or if you want a good challenge that demands your attention, you can go for the big boys.

As far as difficulty goes, I recommend completing the tutorial, trying the easy mode a few times, and then bumping it up to hard. Easy mode displays a UI that shows you exactly where you are in terms of tension and which direction you need to pull your rod. Hard mode loses the UI, and it forces you to actually watch what the fish are doing as you reel them in. I’m not sure what expert mode does, because I’ve been too much of a pussy to try it. I imagine it loses the fish detector and possibly the line color tension indicator. As you go up in difficulty levels, the game becomes less forgiving in terms of losing the fish. Hard mode has been a satisfying challenge for me thus far.

The force feedback in this game is outstanding. Fishing games inherently work well with VR force feedback. Real VR Fishing nails it. Whether you’re reeling in the big fish or you’re casting your line and the lure breaks the surface of the water—the force feedback feels great in the Oculus Quest 2 controllers. I haven’t tested this game on the other Oculus systems, but I would expect the results to be very similar.

Real VR Fishing has a few other unique features. As you catch fish, you can add them to your aquarium in your lodge. This is a nice touch. The fish look fantastic swimming around, and as you progress in levels, you have the option to add cosmetics to the aquarium. You can purchase several cosmetics for your avatar. This is cool because the game has a built-in photo mode which includes a selfie camera along with multiplayer support to play with your friends.

Real VR Fishing is an essential title for your Oculus collection. The game is only $20 on the Oculus store. You’ll have a blast playing the game, and between this and Beat Saber, you can show off some of the coolest features of VR to newbies in under 10 minutes. Real VR fishing has top-tier graphics for not only a VR title, but fishing games in general. The mechanics of this game are solid, challenging, and fair. The tutorial is a bit lean, but if you follow the recommendations I gave in the review, you should be fine. Fine tuning your angling skills is a big part of the fun. This is not an aquatic slot machine! Along with multiplayer support, the game allows you to play your own music or even videos on the Quest while you fish. The attention of detail that MIRAGESOFT has implemented in this game builds up to deliver a one-of-a-kind experience, whether you’re a master angler at heart or someone just looking to try a quality experience in VR.