In this episode of the Red Eye Report, we gush about families in Hollywood. Seriously, a lot of these MFs are related! Also in the show, we nerd out about Arcane and share hilarious customer service industry tantrums we’ve witnessed.

It’s easy to have a foot in the door, when the door was your mom’s vagina.

13 Celebs with rich/famous relatives LOOP THIS

The Coppola family tree branches wide, but its root system is strong thanks to its spiritual patriarch: director Francis Ford Coppola. The director who defined 70s Hollywood with The Godfather (1972), The Conversation (1974), and Apocalypse Now (1979), Coppola also backed the work of fellow film titans Akira Kurosawa and Jean-Luc Godard with his American Zoetrope studio, co-founded with George Lucas in 1969. American Zoetrope also produced The Virgin Suicides, the first film by Coppola’s daughter, Sofia Coppola, who won an Oscar for writing her second film, Lost in Translation. His son Roman Coppola is a Golden Globe-winning filmmaker, and his other son, Gian-Carlo Coppola, was a film producer whose daughter, Gia Coppola, debuted her own film, Palo Alto, in 2013. Francis’s sister, Talia Shire, is an Academy Award-nominated actress whose son is actor Jason Schwartzman; Francis’s brother, August, was a prominent film academic and executive whose son is Oscar-winning actor Nicolas Cage. 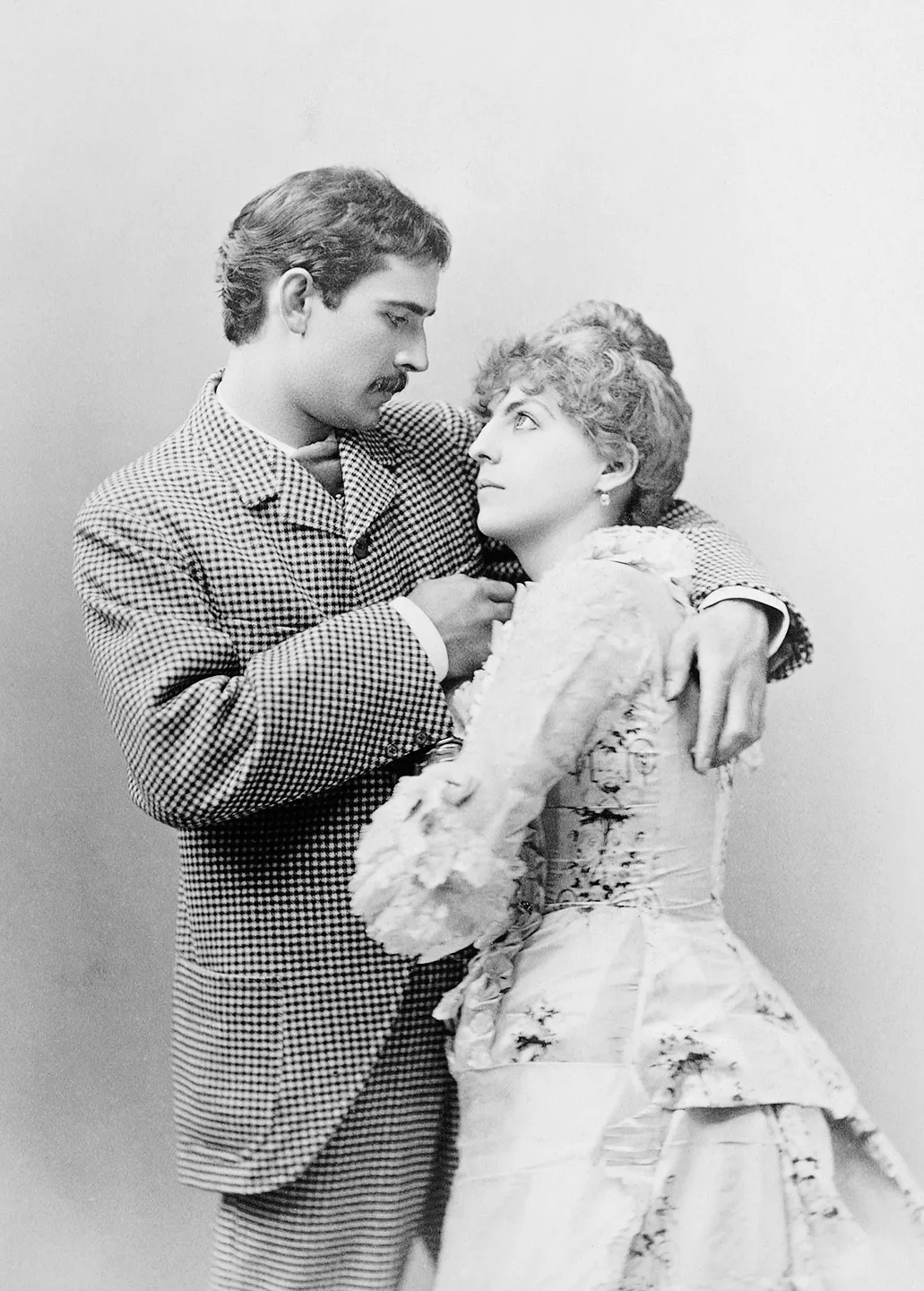 It began in 1874, when Maurice Barrymore moved from England to New York City and made his Broadway debut alongside actress Georgiana Drew, herself the daughter of an acting family. They married in 1876, and their three children, Lionel, Ethel, and John Barrymore, each found their own path to fame. Lionel’s long acting and directing career spanned stage and screen, with roles in hits like Grand Hotel (1932), Key Largo (1948), It’s a Wonderful Life (1946), and 1931’s A Free Soul (for which he won an Academy Award). Ethel had a renowned career in the theater—she was a founding supporter of the Actors’ Equity Association, and still has a theater named for her on 47th Street. John became the most celebrated Shakespearean stage actor in the world during the 1920s—Laurence Olivier and Alec Guinness both counted him as an influence—and he also starred in popular films like Dr. Jekyll and Mr. Hyde (1920), Sherlock Holmes (1922), and Don Juan (1926). John’s son, John Drew Barrymore, was also an actor, though the family legacy is now carried on by his daughter: actress, producer, and director Drew Barrymore, who has starred in over 50 films and heads her own production company, Flower Films.

The Fonda family story begins with Henry Fonda, who made his Hollywood debut in 1935 and went on to appear in over 80 movies—many of which, like The Grapes of Wrath (1940) and My Darling Clementine (1946), positioned him as the quintessential American hero. He didn’t receive his first best-actor Academy Award until he was 76, for 1981’s On Golden Pond—in which he starred alongside his daughter Jane Fonda. Jane rose to stardom as a bankable actress in popular films like Barefoot in the Park (1967) and Barbarella (1968), then went on to win two Oscars, for 1971’s Klute and 1978’s Coming Home. She also cemented herself as a political activist and feminist icon. Her brother, Peter Fonda, was a prominent figure in the counterculture scene of the 1960s and rose to stardom in the landmark 1969 film Easy Rider, which he co-wrote, produced, and starred in; he earned an Academy Award nomination for his role in Ulee’s Gold (1997). Peter’s daughter, Bridget Fonda, and Jane’s son, Troy Garity, both actors, continue the family legacy into a third generation.

When musician and actor Eddie Fisher married actress Debbie Reynolds in 1955, they were a golden pair—Eddie, as king of the 1950s pop charts, was at the height of his crooning career, and Debbie, just off her acclaimed breakout role in Singin’ in the Rain (1952), was a fresh new starlet. It all ended quickly, though, when in 1959 Eddie began an affair with—and eventually married—Debbie’s friend Elizabeth Taylor. Eddie’s career never quite recovered from the ensuing scandal, and Debbie—who’d go on to enjoy a robust film and stage career, including an Academy Award-nominated role in 1964’s The Unsinkable Molly Brown—found it difficult to buck her “branding” as the jilted wife. Eddie and Debbie’s daughter, Carrie Fisher, began her acting career at 18 in Shampoo and had one of history’s most iconic roles as Princess Leia in the Star Wars series, in addition to a robust career as a writer and stage performer. Carrie’s brother, Todd, is a producer and cinematographer, and also curates the remainder of his mother’s extensive movie memorabilia collection. Todd and Carrie’s half-sisters, Joely and Tricia Leigh Fisher, are actresses and singers, and Carrie’s daughter, Billie Lourd, is poised to carry on the family tradition with a promising acting career—including a role in the new Star Wars films.

The four Baldwin brothers are well known for their acting contributions—the eldest, Alec Baldwin, has enjoyed the most mainstream success, earning an Oscar nomination for The Cooler, plus two Emmys, three Golden Globes, and seven SAG Awards for his role on NBC’s 30 Rock. Daniel, William, and Stephen were all essentially discovered by Oliver Stone, who cast them in his 1989 film Born on the Fourth of July—they’ve cumulatively gone on to appear in almost 300 films and TV shows. The brothers have now fathered a crop of famous daughters: Alec’s daughter Ireland (with actress Kim Basinger), Stephen’s daughters, Hailey and Alaia, and William’s daughter Jameson are poised to create a dynasty in a different industry—all but the latter (still an undecided young teen) have signed major modeling contracts.

Will Smith made a then-unheard-of leap from sitcom stardom to blockbuster status in the mid-1990s, and set a record in the process: in 2008 he became the only actor in history to boast eight consecutive films that grossed over $100 million in the domestic box office. In 1997, Smith married Jada Pinkett, star of over 30 films, including 2017’s Girls Trip; the two have also turned their eye for success onto their children, Jaden and Willow, who both began their careers starring in films alongside their parents. The Smiths co-produced Jaden’s breakout hit, a 2010 remake of The Karate Kid, and after Willow’s debut single, “Whip My Hair,” went platinum in 2010, she became the youngest artist signed to Jay-Z’s record label. Both teens continue to work as actors and musicians, and—through their social-media presences and headline-making interviews—are doing their part to redefine the Hollywood dynasty for a new generation.

The Wayans family is one of Hollywood’s largest and most successful comedic dynasties of both TV and film, with its members often collaborating together on projects. The first-generation siblings—Keenan, Damon, Kim, Shawn, Marlon, Dwayne, Nadia, Elvira, Diedre, and Vonnie—have produced, directed, written, and starred in dozens of films and TV shows, and boast a combined net worth over $100 million. Damon and Keenan are best known for their groundbreaking 1990s sketch-comedy TV series In Living Color, which starred many of their siblings and launched the careers of Jennifer Lopez, Jim Carrey, Jamie Foxx, Rosie Perez, and more. Keenan also created the Scary Movie franchise of the early 00s, paving the way for a new generation of spoof comedies. While the original generation is still splashed across film and TV screens, a massive crop of new Wayans are finding fame of their own—most notably Damon’s son Damon Wayans Jr., whose film credits include Wayans collaborations like 2009’s Dance Flick and roles on TV shows like New Girl and Happy Endings

Kirk Douglas became famous for dramatic roles in Westerns and war movies in the 1950s, but he also bucked the studio system of the time by founding Bryna Productions in 1955, in an effort to fund his own projects. Among the 19 films produced were collaborations with Stanley Kubrick. Kirk also gave screenwriter Dalton Trumbo an on-screen credit for Spartacus, in defiance of the Hollywood blacklist. Kirk purchased the rights to One Flew Over the Cuckoo’s Nest and gave them to his son Michael, who produced the 1975 best-picture winner. Michael has since enjoyed a thriving acting career that has included Oscar-, Golden Globe-, Emmy-, and SAG Award-winning roles, along with a 2009 A.F.I. Lifetime Achievement Award. Michael collaborated with his brother Joel, a producer, on The Jewel of the Nile (1985) and Romancing the Stone (1984), and his half-brother Peter is a successful producer. In 2003, Kirk, Michael, Kirk’s wife Diana, and Michael’s son Cameron all appeared in a film titled, appropriately enough, It Runs in the Family.

All four of actor Martin Sheen’s children—Charlie Sheen, Emilio Estevez, Ramon Estevez, and Renee Estevez—followed him into acting, with Charlie and Emilio establishing flourishing careers to rival their father’s. Martin’s ascent to the acting A-list began with roles in Badlands (1973) and Apocalypse Now (1979), and in the late 90s his role as the president on The West Wing made him a household name. Emilio emerged as a key member of the Brat Pack of the 1980s, and enjoyed box-office success in the Mighty Ducks franchise before transitioning behind the camera to direct. A bona fide movie star in the 1980s and 90s following hits like Wall Street (1987) and the Hot Shots! franchise, Charlie went on to earn $1.8 million per episode of his CBS show Two and a Half Men, becoming the highest-paid actor on television—before a public fallout with the show’s creator, Chuck Lorre, and bouts of manic behavior led to his being fired in 2011.

Oracle: Woops. I guess all your shit is gone!

Ashtray:  Throwing a mantantrum in the service industry

In all Seriousness: Go fuck yourself