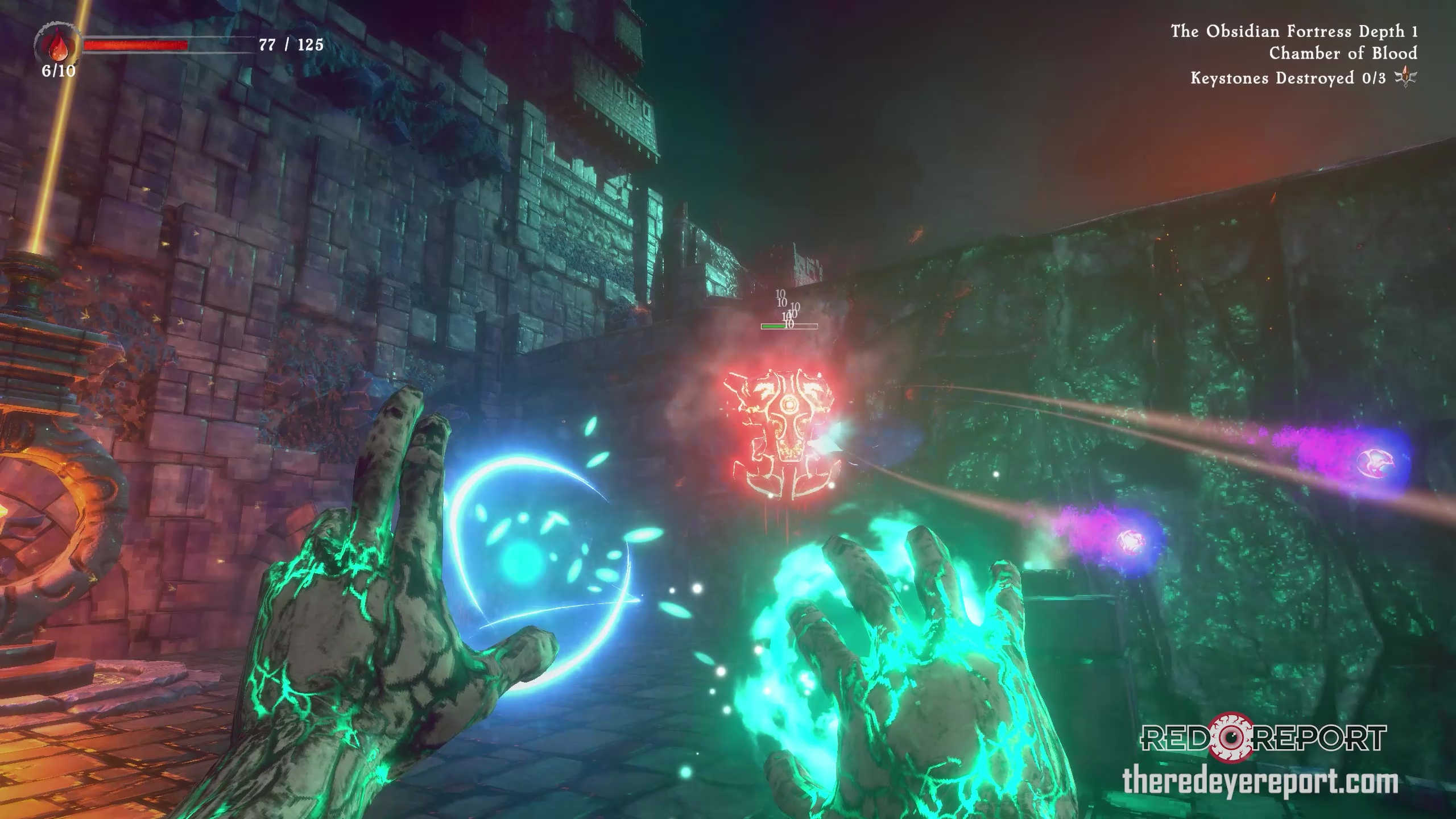 Into the Pit by Nullpointer Games looked awesome when I first saw a trailer. You’re running around with magic shards shooting out of your hands like they’re gatling guns. The action is wicked fast, and the colors are vibrant. The enemies are metal as hell. The aesthetic and movement quickly reminded me of games like Devil Daggers and Doom with a little Until You Fall mixed in. These are all very good ingredients to have in a mayhem and murder cake. It recently dropped on Game Pass, so I decided to fire it up on PC.

Here’s the premise. You show up to a small village with a demonic pit in the basement. Most of the villagers have been locked away in that pit by some asshole called the Alderman. Your job is to liberate these poor villagers from the levels of the pit, and by doing so, you will feel good about yourself and gain access to runes and upgrades.

Into the Pit is a roguelike FPS. You use the pit to access different areas by activating keys that can be purchased by the village key maker. Before each run, you can activate any combination of 6 runes, which provide things like extra health or a stronger chance to acquire certain types of upgrades once in the pit. Every time you enter the pit, the upgrades on spells are reset, but your rune upgrades persist. If you choose to leave the pit before reaching the heart, where the boss resides, or if you beat that boss, you keep your collectibles.

Once you drop into the first of five levels of the pit, you are presented with an alter containing 3 orbs. You must select each orb and choose a left- and right-hand magic power and a defensive power. Projectiles all emanate from your hands, and they each have distinct range and pattern characteristics. You have things like a shotgun shape and more of an assault rifle. There are sniperish and cannonish spell choices. The defensive power can range from extra health, to poisoning melee enemies when they attack you. All upgrade drops are based on a dice roll. You can influence that roll by equipping a rune, so if you wanted more curses, you could equip a curse rune, and you would have a higher chance of getting those.

Each level of the pit has 4 alters that need to be activated before you descend into a lower level, and each alter has 2 combat arenas attached to it that you need to choose from. On the gate of each arena, you see what type of collectible is found inside. To clear the arena, you need to destroy a designated number of keystones. There are also non-combat arenas with things like healing chambers or upgrade alters. This chance and choice make for some fun and impactful decisions as you play Into the Pit.

Let’s talk about spells. There’s no reloading your shooty-hands, but there is a short cooldown period and rate of fire for each hand. You need to take the range of each spell and the blast pattern into consideration as well. Will you go for long range and precise? Or will you go for up close and more powerful? Which hand will you assign which power? Left-mouse is left-hand and right-mouse is right hand. You can’t just hold the magic shooty-trigger down because of the cooldown. Keep in mind these choices are based on a dice roll. That means that you can’t get completely comfortable with a set. I tended to stick with a mid and short attack, regardless on which hand they landed on.

As I mentioned, each of the 4 alters has 2 arenas attached to it. Once you clear one of the arenas, the alter is activated, and it clears the other arena. This means you need to choose your arena based on which collectible you need topside. Or perhaps you need to fill up your blood meter to activate your cheat death ability which does exactly as its name implies.

You can rescue 3 villagers in each pit. You encounter 2 through random rolls, and they will be behind gates in the levels of the pit. You release the final villager after defeating the pit guardian at the lowest, or 5th level. All these systems are interesting, and at no point did I feel overwhelmed by them. After I did the first few runs into the pit, I had a pretty good grasp on how things were working.

Into the Pit’s combat is great. It is ultra-fast and manic. Enemies are flying in through the air, you’re weaving through waves of projectiles, all while juking around ground-based melee attack enemies and shooting everyone in the face. You feel powerful. Each time you clear an arena, you are presented with 3 upgrade options. You can upgrade your left or right hand or your defensive ability. Upgrades affect strength or add curses to your weapons and can be stacked. You could start out with a level 1 curse on your right hand and eventually upgrade it to a level 3 for your run. Selecting lethal combinations and upgrading spells just right feels super-rewarding as you cause your enemies to melt in front of you.

The village and little notes and dialogue exchanges you have with villagers are very cool and atmospheric. In terms of tone, this game is pitch perfect. Speaking of tone, the enemy sound design in Into the Pit is outstanding and critical to being successful. When you are circle-strafing a chamber of baddies, it is essential to identify which enemies are in proximity behind you. Fortunately, all enemies types have a distinctive sound, like the clacking of little monster feet on cobblestones, or the scream of a disembodied head. The game intelligently fires off these sound cues just in time for you to react, and all this happens extremely quickly, so you need to respond accordingly.

The graphics, especially the color pallet is wonderful. Dark chambers are lit up with bright flashes from your magic and from the exploding chest cavities of your enemies, drenching the ground in bright red blood. The game starts with a pixel filter enabled. I could immediately tell that there was substance hiding behind those pixels. I appreciate Nullpointer’s decision to let you disable the filter if you want, which I did.

What I have mentioned so far makes for a good game. Here’s what is preventing Into the Pit from landing firmly in the great game category. The game plateaus relatively early on and doesn’t make any meaningful change for a good stretch. Each new area has different enemy types, which makes for good variety, but you must kill a lot of them to clear the arenas. Each arena can take as little 2 minutes to clear. This is fine, but you need to free 30 villagers before descending into the final pit. That’s 10 pit descents, each with 4 levels of combat arenas with 4 alters that need to be unlocked on each level. If you never abort a run and return to the village, that’s 160 regular combat arenas with a boss at the 5th level of each pit. It’s a lot without having any big jumps in progress to show for it.

You can purchase most of the runes that you will use on your runs early on, and the resources needed to upgrade those runes, perception motes, are hard to come by. It wasn’t until I had freed 18 villagers, and I gained the ability to purchase perception motes, that my progress felt tied to the decisions I was making on resources and upgrades.

I found the arenas to be functional mechanically, they never hindered my combat, and appealing visually, but they seldom stood out. I was constantly focused on avoiding enemy attacks and seldom felt like anything in the environment elevated the combat beyond what I had done throughout the game. Enemy attacks become predictable after a while. Although becoming more proficient at the game and making smart decisions about spells and runes was somewhat satisfying, the boss battles were not challenging. If you circle-strafe, and you are aware of incoming enemies from the periphery, which happens at the mid-point of every boss battle, you will be fine. I never aborted my run prior to the final boss battle. The only times I died was when I tried to secure other alters prior to hitting a regeneration chamber. It’s an interesting calculation that you’ll have to make, and it adds a good strategic layer, but I was successful much more often than I wasn’t.

One final note, and this one might be based on my personal taste, but there wasn’t enough variation in music. The music was plenty good early on, but it got repetitive. I eventually turned the music off and listened to music and podcasts in the background. It turns out that black metal grunts and growls sound a lot like the enemies.

If you like what you see from the footage of Into the Pit, you should absolutely try it out. You can finish the game in about 10 – 15 hours. It’s an awesome experience. My hope is that Nullpointer keeps refining this formula. They have something good going here, and it’s not hard to imagine a future iteration becoming a standout, must-play experience.