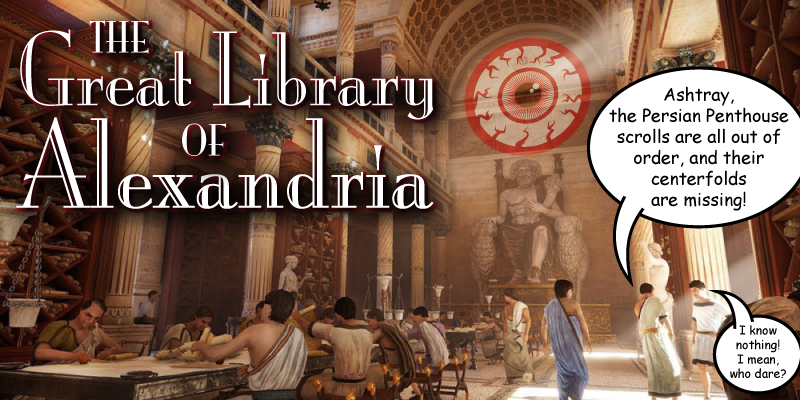 In this episode of the Red Eye Report, we discuss the Great Library of Alexandria. Just how influential was this place, and how did it come to an end? We review Dune, Forza Horizon 5, Werewolves Within, and bicker like a bunch of angry geese.

Tonight on the Red Eye Report, we discuss the Great Library of Alexandria. How important was this place in human history? I think what we know about it will blow you away. With me tonight is Page Turner Teddy. He’s a well-respected and well-read man…in the world of literatica. Alongside him is Autobiographical Ashtray. He won’t shut the fuck up about himself, so we’ve given up and just let him ramble on endlessly about the boils rimming his asshole. We also have Meteoroskopion Mistic. Fun fact, if you twist his nipples just right, you can tell when the next lunar eclipse is coming. Finally, there’s me, Oracle. I always heard those hip cats were up to something cool over in Alexandria, so I fired up my America Online Account and Asked Jeeves. You thought Bing was bad. Jeeves is a dirty motherfucker. Welcome ladies and gentlemen, to the Red Eye Report.

2300 years ago, the rulers of Alexandria set out to fulfill one of humanity’s most audacious goals to collect all the knowledge in the world under one roof. In its prime, the Library of Alexandria housed an unprecedented number of scrolls and attracted some of the Greek world’s greatest minds.

By the end of the 5th CE, the great library had vanished. Many believed it was destroyed in a catastrophic fire, the truth of the library’s rise and fall is much more complex. The idea for the library came from Alexander the Great. After establishing himself as a conqueror, the former student of Aristotle turned his attention to building an empire of knowledge headquartered in his namesake city. He died before construction began, but his successor Ptolemy the first executed Alexander’s plans for a museum and library.

Located in the royal district of the city, the Library of Alexandria may have been built with grand Hellenistic columns. Native Egyptian influences are a unique blend of the two. There are no surviving accounts of its architecture. We do know it had lecture halls, classrooms, and of course shelves. As soon as the building was complete, Ptolemy the first began to fill it with primarily Greek and Egyptian scrolls, he invited scholars to live and study in Alexandria at his expense.

The library grew as they contributed their own manuscripts, but the rulers of Alexandria still wanted a copy of every book in the world. Luckily, Alexandria was a hub for ships traveling through the Mediterranean. Ptolemy the third instituted a policy requiring any ship that docked in Alexandria to turn over its books for copying. Once a library scribes had duplicated the tax. They kept the originals and sent the copies back to the ship’s hired book Hunters also scoured the Mediterranean in search of new texts, and the rulers of Alexandria attempted to quash rivals. By ending all exports of the Egyptian papyrus used to make scrolls. These efforts brought hundreds of 1000s of books to Alexandria.

As the library grew, it became possible to find information on more subjects than ever before, but also much more difficult to find information on any specific subject. Luckily, a scholar named Callinicus of Cyrene set to work on a solution, creating the Pinakes, a 120 Volume catalog of the library’s contents the first of its kind. Using the Pinakes others were able to navigate the library swelling collection, they made some astounding discoveries.

1600 years before Columbus set sail, Aristophanes not only realized the earth was round, but calculated its circumference and diameter. Within a few miles of their actual size. Heron of Alexandria created the world’s first steam engine over 1000 years before it was finally reinvented during the Industrial Revolution.

For about 300 years after its founding in 283 BCE, the library thrived. But then, in 48 BCE, Julius Caesar laid siege to Alexandria and set the ships in the harbor on fire. For years scholars believe the library burned as the blaze spread into the city. It’s possible the fire destroyed part of the sprawling collection, but we know from ancient writings that scholars continued to visit the library for centuries after the siege.

Ultimately, the library slowly disappeared. As the city changed from Greek to Roman, Christian, and eventually Muslim hands. Each new set of rulers viewed its contents as a threat rather than a source of pride. In 415 CE, the Christian rulers even had a mathematician named Hypatia, murdered for studying the library’s ancient Greek texts, which they viewed as blasphemous.

Though the Library of Alexandria and his calculus texts are long gone, we’re still grappling with the best ways to collect, access and preserve our knowledge. There’s more information available today and more advanced technology to preserve it, though, we can’t know for sure that our digital archives will be more resistant to destruction than Alexandria’s ink and paper scrolls. And even if our reservoirs of knowledge are physically secure, they will still have to resist the more insidious forces that tore the library apart. Fear of knowledge and the arrogant belief that the past is obsolete. The difference is that this time we know what to prepare for.

What really happened to the Library of Alexandria? – Elizabeth Cox

What was lost? Alex on history.stackexchange

Italian author Lucio Russo in his book “Forgotten revolution” argues that a large part of the scientific knowledge of Hellenistic world has been lost. I find his arguments very convincing.

Exact sciences in the modern sense of this word originated in Ptolemaic Egypt and other Hellenistic states, and reached very high degree of development. Few first class works survived, like Euclid, Apollonius and Archimedes, but there is a lot of evidence that this is just the tip of the iceberg. For example, almost all writings of Hipparchus, “the father of astronomy” are lost. We know about them from the account of C. Ptolemy who lived 3 centuries later. Nothing survives of the work of Seleucus of Seleucia, who was Hipparchus contemporary. Ptolemy does not mention him, probably because he was a heliocentrist.

Or look at the “Antikythera mechanism” on Wikipedia and elsewhere, to get some evidence of what was lost.

This does not only apply to exact sciences. Critical scientific study of ancient texts, as we understand it now, also apparently originated in these Hellenistic states.

A legend says that one of the Ptolemy rulers tried to buy (from Athens) original texts of Aeschylus, Sophocles and Euripides. Athenians refused. Then he asked to borrow them to copy. Athenians agreed, but required an enormous security deposit. He payed the deposit, and did not return the original manuscripts:-) I suppose they were kept in Alexandrian Library (where else?).

The same Ptolemy issued the order that all ships arriving to Alexandria must be inspected and searched for books. All books found must be confiscated, and copies made and given to the owners:-)

So we really lost a lot with the Alexandrian library. When exactly it disappeared and how, is also subject to discussion. Some blame Julius Caesar who started a fire during a battle that destroyed a large part of the library. Other people say that it still existed at the time of the Arab conquest, and was destroyed by the conquerors. And many events in between are also mentioned.

The fact is that Claudius Ptolemy (astronomer, who probably worked in Alexandria in 2 century AD) could read Hipparchus. And we cannot. In fact almost all work in astronomy before Ptolemy is lost. And all work in mathematics before Euclid is lost.

We recently learned from secondary sources that there was highly developed combinatorics in the Hellenistic times (Habsieger, L.; Kazarian, M.; and Lando, S. “On the Second Number of Plutarch.” Amer. Math. Monthly 105, 446, 1998). None of the original work survived.

We know the name of the great polymath Posidonius (135-51 BC) whose scientific output is comparable with that of Aristoteles. He wrote on all sciences. All his works are lost. Philosopher (logician) Chrysippus (279-206 BC) was regarded by contemporaries higher than Aristoteles. None of his works survived. None of the works of the founder of scientific medicine, Herophilos (335-280), survived. The great engineer (mechanic, hydraulic, pneumatic) Ctesibius (3d century BC) is credited for many inventions. All his work is lost.

Several sources frequently mention enormous warships of Hellenistic era (Tesserakonteres, Leontophoros are the largest mentioned) whose crew could exceed the crew of a modern aircraft carrier. Historians speculate for the last 2000 years how these ships looked and how could they be constructed. No clear description survives.

REMARK for a mathematician. What we know of mathematics before 300 BC mostly comes from Euclid. Imagine that from our contemporary period only Bourbaki books survive…

REMARK 2. There is a consensus among modern scientists that Democritus of Abdera was one of the greatest scientists who ever lived.

Here is the list of works of Democritus, as given by Diogenes Laertius: Great Cosmology; Little Cosmology; Cosmography; On the Planets; On Nature; On Human Nature; On Intelligence; On the Senses; On the Soul; On Flavors; On Color; On Diverse Movements of the Atoms; Of Changes in Shape; The Causes of Celestial Phenomena; The Causes of Atmospheric Phenomena; On Fire and On Things in Fire; The Causes of Acoustic Phenomena; Concerning the Magnet; The Causes of Seeds, Plants and Fruits; On Animals; A Description of the Sky; Geography; A Description of the Pole; On Geometry; Geometrical Reality; On the Tangents of the Circle and the Sphere; Numbers; On Irrational Lines and Solids; Projections; Astronomy; Astronomical Table; On Rays of Light; On Reflected Images; On Rhythm and Harmony; On Poetry; On the Beauty of Song; On Euphony and Cacophony; Concerning Homer, or on Correct Epic Diction; The Science of Medicine; On Agriculture; On Words; On Names; On Values, or On Virtue; On the Disposition which Characterizes the Wise; On Painting; A Treatise on Tactics; Circumnavigation of the Ocean; On History; The Thought of Chaldea; The Thought of the Phrygians; On the Sacred Writings of Babylon; On the Sacred Writings of Meroe; On Fevers and the Coughs Deriving from Illness; On Aporiae; Legal Questions; Pythagoras; On Logic, or Criterion of Thought; Confirmations; Points of Ethics; On Well-being. All lost …

This is an incomplete list (just samples) of the items that WE KNOW and which are lost. What things were there which we do not know, (because all references to them are also lost) is open to

In all Seriousness: Go fuck yourself motherfuckers that destroyed the Great Library of Alexandria!