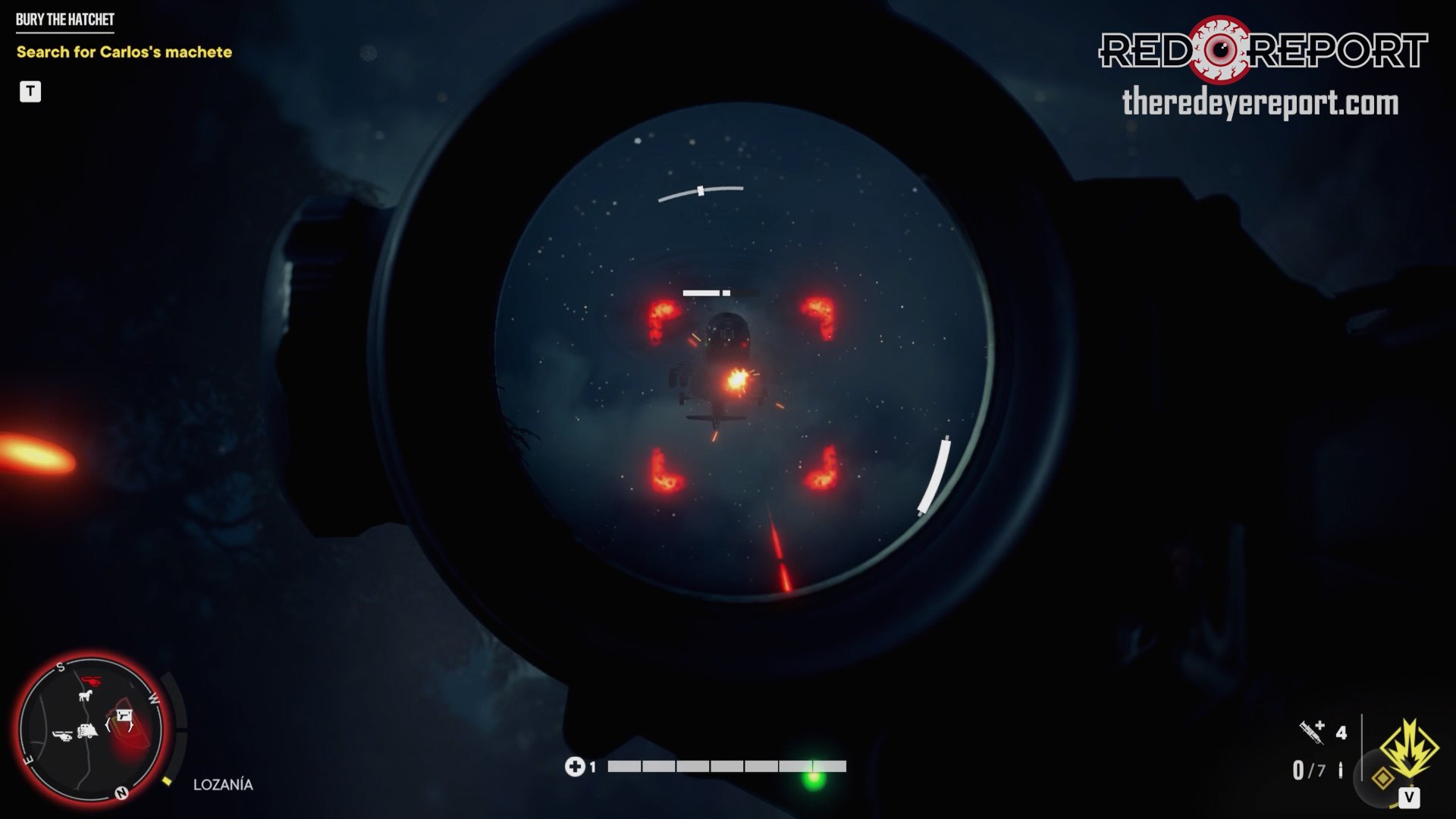 Far Cry 6 has a lot going for it. The island nation that you spend the game liberating is huge and gorgeous. All that real estate doesn’t go to waste either. Around every corner, through every mountainous path, on every beach, there is something to look at or do. You might stumble upon an enemy patrol to harass, free some prisoners, find some loot…it’s all there.

The shooting in the game is the best it’s ever been. You have a plethora of weapons to choose from. Each with different stats and upgrades which can be selected once you have enough materials to purchase them. One of the compadres that you meet early on, Juan, an ex-guerilla fighter/CIA/KGB/fucking everything, insists that you must choose the right tool for the job when you go out on your various missions. And this is where cracks begin to show in Far Cry 6.

You have a huge assortment of weapons to choose from, but it largely ends being a choice between soft-target rounds, which do more damage on unarmored enemies and armor-piercing rounds, which you guessed it, kills armored enemies. Of course, none of this really matters, because if you shoot enemies in the head, preferably with armor-piercing rounds to cut through helmets, they will die instantly.

Far Cry 6 should have the tagline “None of This Really Matters Edition.” I’ve never played a game which was built on such good bones that tries to undermine what is has going for it so thoroughly…and makes the player pay so brutally for getting involved.

Am I cranky? Yes. I finished the game not long ago, and I’m pissed. Let’s start with this right tool for the job bullshit. I think it wasn’t until 10 hours into my 30-hour playthrough that I realized that all these weapon choices were meaningless. I ended up changing my primary rifle once and never swapped out my secondary rifle after I acquired it early in the game. My AK-47 had soft-target rounds and upgrades which were good in close quarters like a reflex sight and a larger mag. My M-16 had a 4x optic on in and a halfway decent silencer. Those were the best weapons I had for the entire game…an AK-47 and an M-16. Throw in a rocket launcher, a decent pistol, a Supremo, and I was set for any confrontation.

The Supremo I mentioned is a charged super weapon that allows you to unleash a flurry of rockets or poison or healing or fire, etc, etc, depending on which variation of Supremo you choose. Of course, because this is Far Cry 6, the first variation was the best one, and the other ones were useless novelty items, which I didn’t care to use. They sucked and weren’t worth the effort.

Despite the game providing ample upgrade resources, I stopped giving a fuck about collecting resources about 15 hours in. I didn’t need to upgrade anything. I just wanted to get to the end of the fucking game, and I had so much to do to get there. I felt overworked, and every decision I made from that point on was to get me to the next mission so I could progress the story. All those beautiful waterfalls and fun and wacky occurrences in the jungles of Yara were lost to me. I had shit to do, and I knew ultimately, whatever I did would matter only marginally.

One of the few glimmers of hope that I had for the late game was the use of helicopters. The enemy has a shit-ton of helicopters that you’ll need to shoot down, but you also get an assortment of copters and planes equipped with rockets and machine guns. Fun stuff, right!? Too bad you’ll have to take out the 30+ anti-aircraft sites dotted around Yara before you can have fun in the skies. Oh, and by the time you manage that, the game will largely be over. WHAT THE FUCK!?!

There’s this huge, beautiful world filled to the gills with bad guys, and I felt like I had a leash on the entire time. Sure, I could fuck things up massively with my armaments, but those engagements looked the same no matter how much carnage I was inflicting. Head shots with my anti-armor rounds, shoot the enemy helicopters and trucks with my rocket launcher, maybe throw a Molotov.

The game became a never-ending headshot carnival game. I would walk into ABSOLUTELY ANYWHERE without doing recon, maybe sneak along a flank, and pick off enemies one-by-one with headshots. If an alarm was raised or it was one of the missions where they sent endless enemies swarming, I would escalate, use my Supremo, and begin shooting trucks and helicopters with my rocket launcher. Now multiply that engagement by about 2,000, and you’ll begin to get an idea of what the Far Cry 6 experience is.

Oh yeah, I forgot to mention you have a choice of companion for the game, a man-eating croc or a paraplegic dog with wheels for back legs. Why did I forget to mention them? You guessed it…because they don’t fucking matter. They were fun for the first 5 hours, and at some point, I accidentally turned them off, and just never bothered to have them accompany me again.

There’s a cock fighting mini game. It’s fully formed just like all this other bullshit, but there was no way I was going to search the world for roosters to fight for me. I had an endless bucket of meaningless checkpoints to take over. There’s a turn-based, choose your path, mission dispatch system. You could get rewarded resources for the missions. Oh yeah, I don’t give a fuck about your resources because I don’t need them. There’s this cool mode where you have to extract a temperature sensitive core out of a large bespoke mission area, like a dinosaur themed waterpark, and then bring that core to a drop-off, all the while keeping it cool with water in the environment, and the shade. What do you get for completing these long-ass missions? For me, it was resources to upgrade one silencer…slightly. I ended up doing one of these missions out of several, because at the end of the day, they didn’t matter.

The writing and acting is generally good in this game. There are several great characters and performances in Far Cry 6. The dictator that you’re trying to kill, Anton Castillo played by Giancarlo Esposito, is fantastic to watch. He’s layered, and his relationship with his son and everyone around him is fucked. And you meet some interesting fellow revolutionaries along the way, too. One of the old legends, El Tigre, the most macho guerilla fighter you’ll ever see was one of my favorites and watching how the legends clashed with the younger generation of guerilla fighters was genuinely interesting. It was even better when they came together and launched some truly awesome attacks that you get to be a part of. This is when Far Cry 6 is at its best. It’s much worse when you’re forced to rub shoulders with less likeable characters with less depth, and this seems to happen with increasing regularity as the game goes on.

Should you play this game? First off, don’t buy it at full price. For the love of God, don’t pay $120 for the complete edition. Ubisoft+ for $15 a month, will let you play Far Cry 6 or any other Ubisoft game. I would go with that option. I was impressed with Far Cry 6 for the first 5 – 10 hours. They have built an impressive world that looks good and for the most part, is filled with people and stuff. The honeymoon period began to wane rapidly though around hour 10, after I realized that really, the collectibles weren’t worth spending the time getting, and the engagements were all: headshot…headshot…headshot…truck is coming…rocket launcher. I spent a huge amount of time clearing out anti-aircraft sites, only to cash in on that time investment on a few missions, and even when I would attack the enemy with helicopters, there always seemed to be a few more bad guys that I needed to shoot in the head after landing, making me wonder if I should have just driven up and shot everybody in the head in the first place.

I’d say give the game a try. You’ll probably like the early hours of Far Cry 6, but if you begin feeling like you’re not enjoying the game as much, well, it’s not going to get any better. You’ve seen the best that Far Cry 6 has to offer. Shelve it, and maybe there will be a more dynamic expansion in the future.