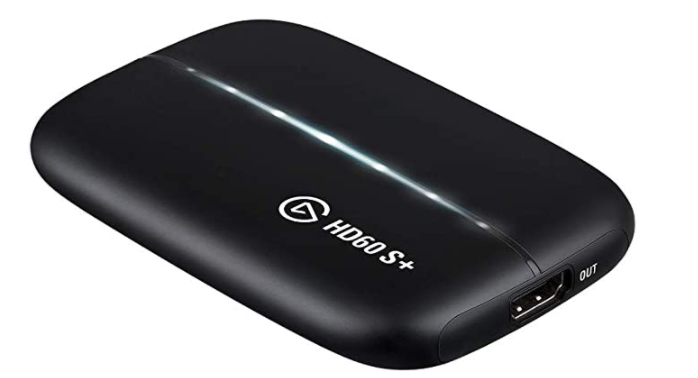 Streaming video games is another dumb and fruitless hobby that I have. It’s consistently a pain in the ass if you want to do anything like add overlays and a camera with a green screen. You need a capable PC to do this. Your stream will look like pixel vomit if you don’t have a high enough bitrate or fast enough internet connection. Oh wait, how do you add party chat? Oh, you want HDR while you’re playing? Don’t even get me started on HDCP or High-bandwidth Digital Content Protection or copyright claims on music that is being played in game. Jesus wept.

Anyway, my last external capture card was the AVerMedia Live Gamer Portable 2 Plus. All in all, I was happy with how the card performed, although there were a few notable limitations. Probably the most important for me was the lack of 4K HDR passthrough while plugged into the card. If I was streaming, my games didn’t have HDR. That would not do for ole boyo with 4K-oyo. So I upgraded.

I’ve heard good things about Elgato minus the usual bitching about streaming in general. Their cards are considered to be at the top of the food chain in terms of consumer-grade streaming tech. Now that I have an Xbox Series X, which you can read my review of here, I wanted to pass HDR through to my TV while streaming. The external card that would allow me to do that was the Elgato HD60 S+ for $199.

Here are my impressions after having this card for a week. It looks really good. This card has no problem handling 1080 streams at 60 fps and the graphics look fantastic. I use OBS as my streaming platform and it had zero problems recognizing the card. HDCP is still a pain in the dick. If I want to watch Disney+ or Netflix on my Xbox, I need to unplug my HDMI cable from the Elgato and plug the Xbox directly into the television. This means I have to get my fat ass up and dig behind the TV more often than I’d like. I’m lazy and slightly retarded; so to simplify and foolproof this process, I’ve color coded the cables to reduce the chances that I will fuck it up. Why there isn’t some sort of switch to handle this is beyond me.

Elgato has 4K game capturing software. I used it a bit, and it seems perfectly capable for what it’s intended purpose is. I was surprised that this software does not appear to have built-in streaming capabilities. You will need to use OBS, SLOBS, or some other streaming platform on your PC.

Let’s talk about audio with this thing. The audio quality sounds perfect. Here’s the deal though: depending on what type of USB port you are using and the speed of your PC, you might have considerable lag between the capture card video and audio. I’m talking seconds worth of lag. Now this varies depending on your hardware setup. For instance, on one of my laptops, which for some fucking reason the USB 3.0 works fine sometimes and other times it doesn’t (fucking Obama), my lag time between audio and video is 680 milliseconds. The recommended number by Elgato is 650 milliseconds. You’ll need to fine tune the number. 650 is a good place to start. On another laptop that I tested that has actual USB 3.0 ports and not crap Denny’s ports like the aforementioned one, there was zero delay.

I’ve found the best way to test the delay is to bring up a game with a predictable sound that you are familiar with. I brought up Rocket League and recorded a clip of me jumping 3 times. I could then get the audio delay set correctly based on that. Repeat as necessary. The audio delay has brought up interesting challenges in terms of party chat.

I bought a party chat cable from Elgato to include chat. It’s dog shit. The connector is loose in my Xbox controller adapter and makes a bunch of buzzing sounds. The cable is too short. I would have to be right up on my equipment to reach everything. When I plugged the cable directly into the Elgato HD60 S+ “audio in,” it didn’t fucking work. Boo. The AVerMedia card handled party chat much better. You plugged it in and it worked. There were also no concerns about delay. I managed to find a decent solution for the Xbox Series X. I imagine this will work on other Xboxes. No it won’t work on your Xbox 360…smartass.

In your audio output options, you can change your party chat output to headset and speakers. This will run the other people in your chat through the HDMI, thus allowing it to be captured with the gameplay. You will need another microphone to capture your own voice. I use a wireless microphone setup. Mine is a Phenyx Pro wireless system. This thing is tits honestly. Just remember to turn your wireless pack off when you go to the bathroom to take a shit. I use a digital interface to pipe the wireless audio into my laptop via USB. One more thing, you need to delay your voice and webcam to match the HDMI party audio that is coming in…had zero delay.

Hey, I wasn’t kidding when I said this was a pain in the ass.

I’m guessing the dog shit audio cable I bought from Elgato would work if I plugged it directly into my PC. That would cut down on the delay offset issues for party chat. Other notable things that I’ve noticed about the Elgato HD60 S+: CPU usage has been wonderful while using this card. It’s at around 3% in OBS when I’m streaming 1080p 60fps. This is much better than the AVerMedia card that I had. Heat doesn’t seem to be an issue. Passthrough feels instantaneous to the TV and even to my computer. Because of this, I’m completely confused as to why the audio is so delayed on some ports. As far as aesthetics go, the HD60 S+ looks like a small external hard drive.

Am I happy with my purchase? Yes. Is streaming video games with overlays and other features still a minor clusterfuck. Yes. If you want to stream games with camera and overlays and all of that horseshit, you have a next-gen console, are using 4K HDR, and have a capable gaming PC to handle the streaming—this is an excellent external card. There is a good chance you will need to fiddle with the audio. WHY THE FUCK IS THE AUDIO SO WEIRD ON THIS THING!?! But, if you are comfortable setting audio sync offsets in OBS or SLOBS, it should not be an issue. There are plenty of videos on YouTube. 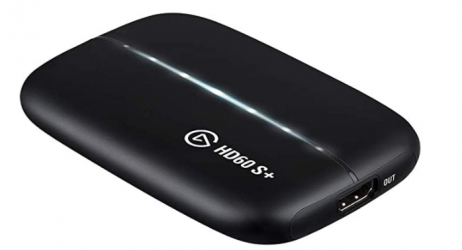